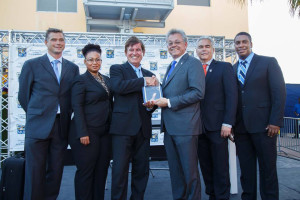 Willemstad – Curaçao Airport Partners and MCB Bank signed a loan agreement for the amount of ANG 82 million guilders, which CAP will use to finance the Curaçao International Airport Expansion Project. CAP CEO Ralph Blanchard and MCB Bank Managing Director Michael de Sola signed the agreement, and with that, marked an important milestone for the construction work at the airport.
It’s the first time that CAP NV finances one of its projects in its totality by means of a local loan. Generally the Board of private company Curaçao Airport Partners NV, that’s partly an international entity with Board representatives from CCR Brazil, Zurich Airport and Janssen de Jong, combine local loans with loans of renowned international banks, which are well-known to them. The Management of CAP was able to convince the CAP Board of directors that complete financing by a local bank was possible and was more favorable.
For more info visit www.facebook.com/curacaoairport